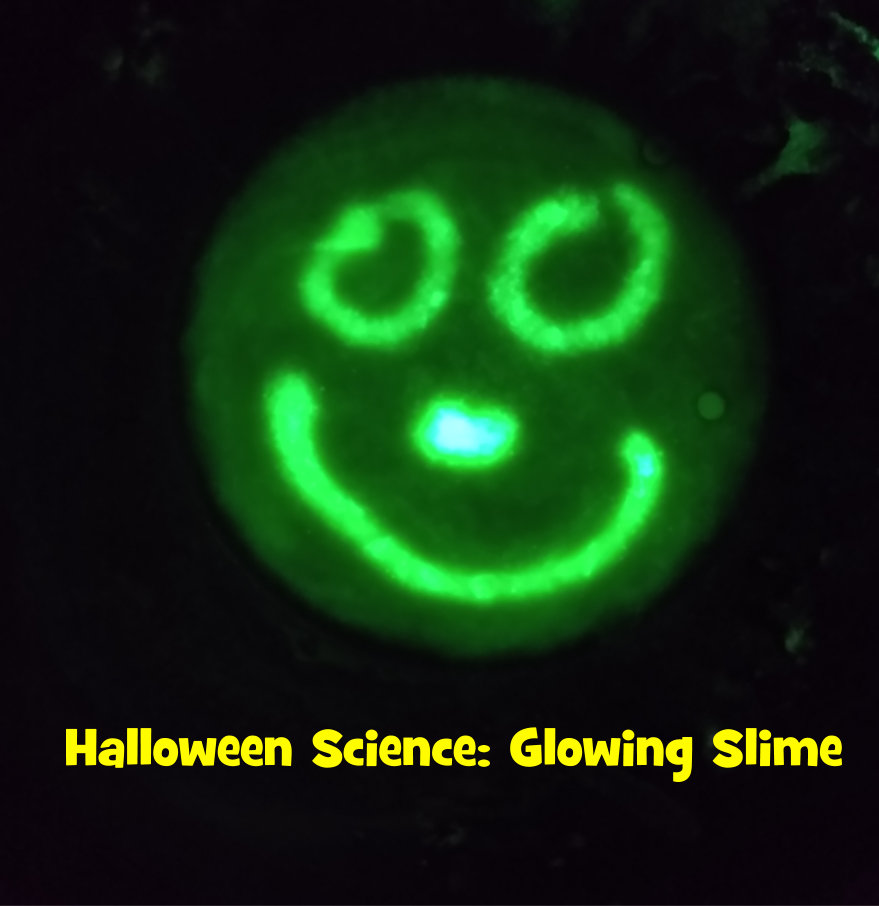 Oozy, slippery slime is great. But this Halloween science activity adds a fun and eerie glow making it great for Halloween parties, if a little messy.

There are loads of slime recipes available online. There are ways to make a slime similar to the commercially available stuff using white glue and borax. Borax is hard to get in the UK (contact lens cleaning solution can be used as a source of borax) it’s also toxic. So, we recommend against home-made borax slime especially when simple cornflour and water slime is so much fun. Sometimes called oobleck it is easy to make, easy to experiment with and really fun. It has an incredible property where if you squeeze it hard enough it turns solid, you can even roll it in a ball and when you stop squeezing it becomes liquid and runs through your fingers.

A large mixing bowl (or cauldron)

Add about 5g of phosphorescent pigment for every 100g of cornflour and mix it up. Add about half as much water as cornflour and mix. Don’t worry too much about exactly what quantities to use of each ingredient because you can always add more as you play. Oobleck has different properties at different ratios of cornflour to water so get experimenting. See if you can get a mix that flows like a liquid when handled gently but when you press hard against it it will turn solid.

To charge your slime hold it near a light source for a few seconds then turn the light off. The surface that gets shown the light will glow so as you play with it you can create swirling, glowing patterns.

Warning – playing with slime in the dark is a recipe for mess.

Phosphorescent pigment can be bought online. Make sure you search for “phosphorescent” not “glow in the dark” pigment. You want the phosphorescent stuff because it doesn’t need UV to make it glow and it continues to glow after the lights are turned off.

You probably won’t need any suggestions for what to do with this stuff, your little scientists will get their hands in and discover some gooey Halloween science. But some suggestions are

Push your fingers slowly into the liquid, then try moving them quickly.

Put it in a bowl and hit it hard with a spoon – the spoon will bounce off the hard surface but if you press it into it slowly it will sink.

Grab a handful, squeeze it and roll it into a ball. The open your hand and let it run through your fingers or try to snap the ball on half.

Get a small torch (use the one on a phone) and write a glowing message on its surface.

Hit it (carefully) with a hammer.

Keep a light source on it as you mix it and see if you can get the whole mass the glow.

Find out of heating or cooling it have any affect on how it moves or glows.

Oobleck is sometimes called “Non-Newtonian” because it responds to forces in an unusual way. It gets thicker, hard and even more brittle the harder a force you apply to it. Oobleck is made of lots of little solid cornflour particles floating about in water. When you hit or squeeze it you force these particles close together and when they rub up against each other they stick. When enough of the particles stick to each other a whole handful of the glorious stuff can become solid, temporarily.

To understand phosphorescence we have to look at something even smaller than cornflour particles: electrons. Everything is made of atoms and atoms are made of little bundles of protons and neutrons with electrons buzzing around them like planets around the Sun. In some materials the electrons are able to absorb energy from light. But they can’t hold on to this energy for long so they release it as light. Luminescent materials instantly release the light energy so they only glow when a light is shining on them. Phosphorescent materials release the energy slowly so they continue to glow after the lights are switched off.

Letterbox Lab is a monthly science kit that arrives through your letterbox containing everything you need to perform incredible experiments with your children.

Your children will love it. It’s colour changing, fizzing reactons, slimes, things that glow in the dark, making helicopters and catapults. All with beautifully illustrated comic-style instructions that they will actually enjoy reading.

You’ll love it because it’s so easy. It just arrives at your house with everything you need to do all the experiments. Unlike other science kits there’s no looking in the back of cupboard for cream of tartar or figuring out where you can buy propanol on a Sunday afternoon.  You just open the box and get started with ease.

Find out more about our unique series of science kits here

If you’d like to try more Halloween science experiments take a look at our Puking Pumpkin and Green Flame Pinecones.