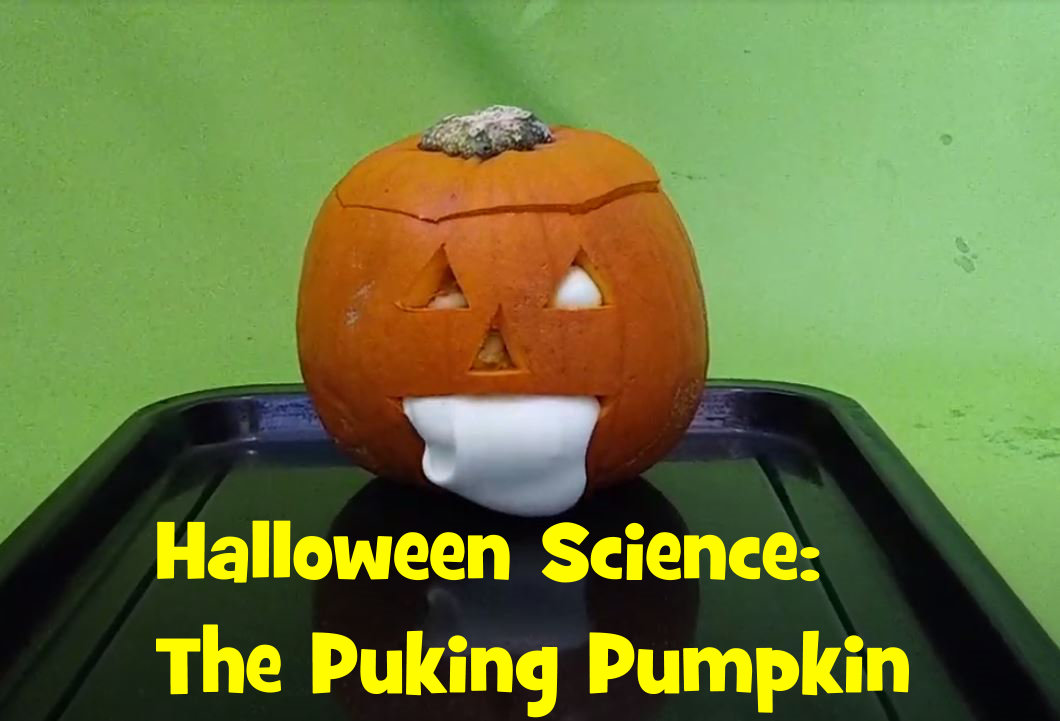 Halloween makes a great theme for science experiments. This is a lovely and gruesome Halloween science activity sure to gross a few people out. In this science experiment you will carve a pumpkin and make coloured foam spew from its mouth using a little chemistry.

Either sodium bicarbonate (bicarbonate of soda) and vinegar or hydrogen peroxide and dried yeast.

The first thing you need to do is carve a pumpkin. Cut the top out to create a large lid that can be removed and replaced. Scoop out all the seeds (don’t throw them away, you can roast and eat them, tasty and healthy)

Cut out and remove large triangles for the eyes and nose, and a big mouth shaped piece. You can be more creative and artistic if you like but it’s not needed. Just make sure you have that large opening for the mouth.

You’re going to be using a chemical reaction that produces lots of gas and trap that gas in a soapy solution to create lots of bubbles. It doesn’t really matter what type of gas it is so there’s two different reactions you can use for this, why not try both and compare? We’re not going to tell you the exact amounts to use in these reactions, part of the fun is trying it a few times and experimenting with different amounts. Your little scientists will get a lot more out of it if they have figured out the best way to do it themselves.

The first reaction we’ll look at will be familiar to our subscribers – vinegar and sodium bicarbonate.

Put a few tea spoons full of sodium bicarbonate in a glass and place it inside the pumpkin.

In the other glass mix up some vinegar (about half a glass), some washing up liquid and some food colouring.

Pour the vinegar mixture through the top of the pumpkin (this is why the opening at the head had to be big) right into the glass inside it and put the lid back on.

The other reaction you can use for this gives a smoother “puke” and lots of it It uses hydrogen peroxide and yeast.

The procedure is pretty similar to the one above with a couple of changes. Use 3% or 6% hydrogen peroxide, which you can buy online. Remember to read and follow the safety information on the bottle. You can get stronger hydrogen peroxide which will give even more foam but it can be dangerous at higher concentrations.

Pour about half a sachet of dried yeast (3 or 4 grams) into a glass. Add a couple of table spoons of warm (not too hot) water to the yeast and give it a stir. Place this glass inside the pumpkin.

Mix the hydrogen peroxide (about half a glass) with some food colouring and a good squirt of washing up liquid.

Pour the hydrogen peroxide mixture through the hole in the pumpkin into the other glass.

So, what’s going in in this Halloween science activity?

Chemical reactions turn one type of stuff into another type of stuff. In this case a solid and a liquid are reacting to make a gas. The gas takes up a lot more space than the solid and liquid. As the gas expands it fills the soap making bubbles. Lots of bubbles.

In the first reaction you react a carbonate with an acid. Carbonates have the chemical formula CO3. The reaction turns it into CO2 which is carbon dioxide, a gas.

In the second reaction you use hydrogen peroxide which is H2O2. You might know that water is H2O, so hydrogen peroxide is like water with a little extra oxygen in it. Over time the oxygen will slowly be released from the peroxide, but yeast contains an enzyme that will speed it up. Enzymes are little balls of protein that control all the reactions that go on inside living things. If our bodies were factories they would be the workers. When the activated yeast meets the hydrogen peroxide the enzymes go to work breaking down the hydrogen peroxide into water and oxygen.

We found the hydrogen peroxide reaction produced lot more foam and more quickly, but there was something nice about the slower trickle with vinegar and bicarbonate. Heat speeds up chemical reactions so you could try warming up the vinegar or mixing the bicarbonate with a little warm water.

Letterbox Lab is a monthly science kit that arrives through your letterbox containing everything you need to perform incredible experiments with your children.

Your children will love it. It’s colour changing, fizzing reactons, slimes, things that glow in the dark, making helicopters and catapults. All with beautifully illustrated comic-style instructions that they will actually enjoy reading.

You’ll love it because it’s so easy. It just arrives at your house with everything you need to do all the experiments. Unlike other science kits there’s no looking in the back of cupboard for cream of tartar or figuring out where you can buy propanol on a Sunday afternoon.  You just open the box and get started with ease.

Find out more about our unique series of science kits here

If you’d like to try more Halloween science experiments take a look at our Glow in the Dark Slime and Green Flame Pinecones.