To stuff or not to stuff? - Letterbox Lab 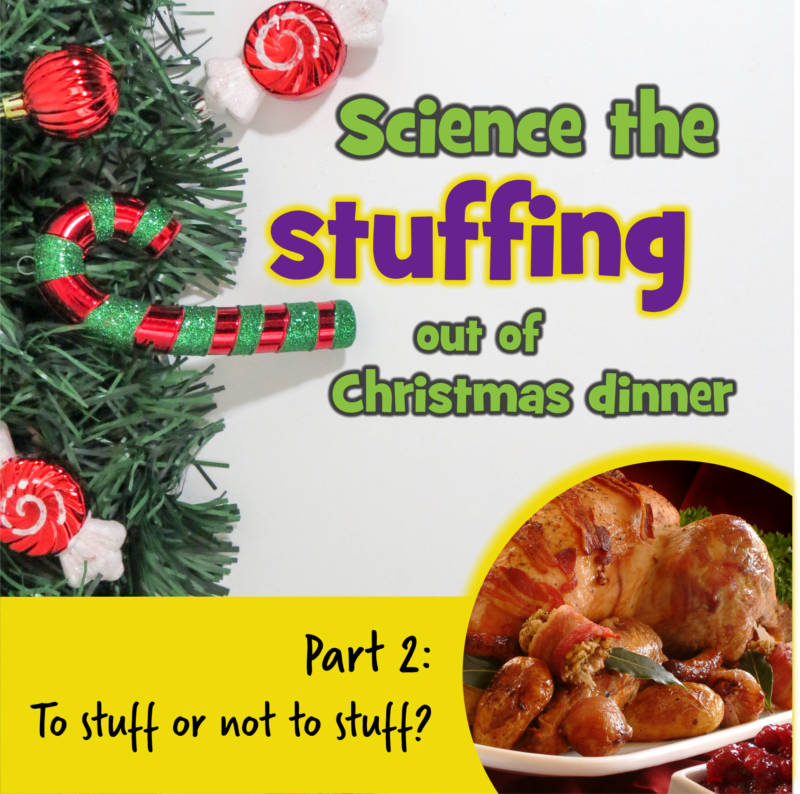 In the first of our festive series of blog posts, Science the Stuffing out of Christmas Dinner, we asked whether or not we should brine our turkey. In this second instalment, we explore the age-old question, “To stuff or not to stuff?”.

This is a controversial issue. Some say if it hasn’t been stuffed inside the turkey it’s not really stuffing, it’s just little balls of stuff sitting beside a turkey, ruining Christmas. Others say stuffing a turkey is the food hygiene equivalent of eating a raw street pigeon.

There’s a lot of truth to both of these positions in my view. Cooking is, first and foremost, a method to raise the temperature of food enough that the nasty bacteria that live in it die. But it’s also very useful for enhancing the flavour and texture of food. The answer to the question of stuffing is one that ticks the first box completely and the second box as much as possible.

The stuffing and the turkey are meant to flavour each other but it is definitely safer to cook your “stuffing” outside the turkey. Stuffing blocks up the cavities of the bird preventing the hot air from the oven circulating around inside it and cooking it. Like chicken, turkey can carry salmonella, and the juices from the turkey will run into the stuffing carrying their salmonella with them. Even if your turkey is cooked enough to kill the salmonella, your dense block of stuffing might not be. If you leave the turkey in the oven for long enough to safely cook the stuffing, you risk overcooking your turkey.

Can science give any tips to help you do stuffing properly without the risks? The Centre for Disease control recommend heating your turkey and the stuffing to 165F, that’s 72C. So, you could invest in a meat thermometer and check the stuffing is up to at least this temperature right inside the centre of the stuffing and in the thickest parts of the turkey. If you find your turkey is up to that temperature but the stuffing isn’t, some recommend you cut your losses and spoon the stuffing out of the turkey and cook it separately while the turkey rests. You’ll still get some of the benefits, and at least you tried. However, that partially cooked lump of stuffing could be teeming with bacteria and there’s the risk you could contaminate other foods. It might be best to just keep on cooking the stuffing inside the turkey, and accept that slightly overcooked meat is the price you pay for “proper” stuffing. 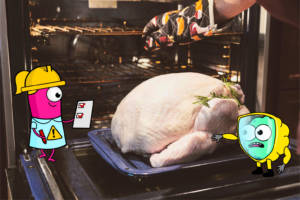 Cooking a stuffed turkey can put your health at risk, but it’s not all doom and gloom. Read on for our top tips on safe and delicious stuffing!

To reduce the risk of having to do this, don’t over-stuff your turkey, leave space along the top of the stuffing running right through the cavity. This will still give you some air circulation to cook both bird and stuffing. Consider just stuffing the neck cavity, which is smaller than the body cavity so the stuffing will cook more easily. Definitely make the stuffing and stuff the bird just before cooking, because you don’t want it sitting around growing extra bacteria before going into the oven. The best trick though is to heat your stuffing before the act of stuffing. Heat it up to about 85C so it’s still good and hot when it goes into the turkey. Then your stuffing will actually help cook your turkey from the inside, giving you a nice even cook.

If you do stuff your turkey, make sure it is up to temperature before serving. The risk you should be prepared to take is the risk of having overcooked turkey, not a sick family. And, of course, you’re going to be cooking some extra stuffing alongside the turkey anyway, because you can never have too much stuffing.

Last Christmas the Letterbox Lab household had eight different stuffings, none of which were cooked inside the turkey, and they were all delicious. Yes, we take stuffing pretty seriously here.

Science the Stuffing out of Christmas Dinner!

Congratulations, science has brought you one step closer to a tastier Christmas dinner. Up next on the menu: the reasons why you should never give up on the gravy. Join our mailing list to receive the whole series in time for Christmas Dinner preparations.