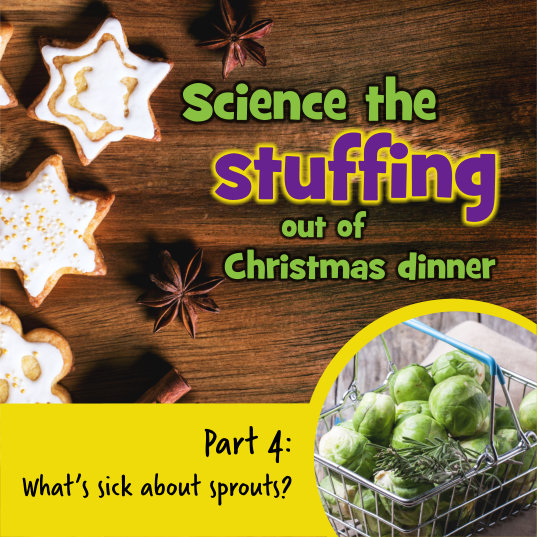 This is the final installment in our Science the Stuffing out of Christmas Dinner series. You can read the first three installments here, here and here. Enjoy your scientifically perfect Christmas dinner!

Brussels sprouts are a divisive vegetable. For many people they are an evil little cabbage ruining a perfectly good dinner, others think it’s not Christmas without them, and then there are those unique individuals who actually like them! Can science shed any light on why this vegetable is so divisive? Can science give us any tips on how to cook them to make this Christmas tradition one that more people enjoy?

As a child I hated Brussels sprouts, cabbage, broccoli and cauliflower. I felt somewhat vindicated in later years when I learnt that they are all the same species of plant: Brassica oleracea. For each vegetable, the plant has been selectively bred to produce large buds (cabbage and sprouts) or flowers (broccoli and cauliflower). When large leaves are selected for in this plant you get kale or spring greens, which I’m sure I would have hated as well had these been trendy in the 80s.

Brassica oleracea has a number of bitter tasting chemicals in it, and people vary a lot in how they taste bitter chemicals. There’s a synthetic chemical called PTC which is similar to some of the chemicals found in green vegetables. Some people find PTC to have a very unpleasant bitter taste, other people don’t taste it at all because they don’t have the taste receptors for it. People who can taste PTC are less likely to like brassica vegetables. Children are generally more sensitive to bitter tastes than adults are, which is thought have evolved to stop them eating poisons. So, if your children are really reluctant to finish their sprouts this Christmas remember that what tastes like a mildly unpleasant Christmas tradition to you could be a truly horrendous taste experience for them.

Some of the unpleasant tasting chemicals in plants are there as defense mechanisms. The plant tastes bad so you don’t kill and eat it. When sprouts are cut or brought up to a certain temperature, an enzyme is released in them called myrosinase. Myrosinase breaks down other chemicals in the sprout into volatile sulphur compounds. Volatile sulphur compounds are responsible for most of nature’s unpleasant smells. People say that overcooking sprouts creates more of these sulphur compounds. It certainly ruins the texture and might destroy other flavours in them but, at least in theory, high temperatures should destroy the myrosinase enzyme stopping it from making your sprouts taste like something you wouldn’t want to step in.

The trick then, according to science, is to bring your sprouts up to a high temperature quickly but maybe not for very long. If you boil them, make sure the water is at a full roiling boil before putting the sprouts in. Oil will reach a higher temperature than water so roasting, stir frying or even deep frying them should prevent some of the unpleasant, bitter and sulphurous tastes. Also, cooking them at a higher temperature makes the complex carbohydrates break down into smaller, sweeter sugars which can react with amino acids in what’s called the Maillard reaction. The Maillard reaction is what gives browned food its rich and complex flavour.

However you decide to cook them, have a very merry sprout day.